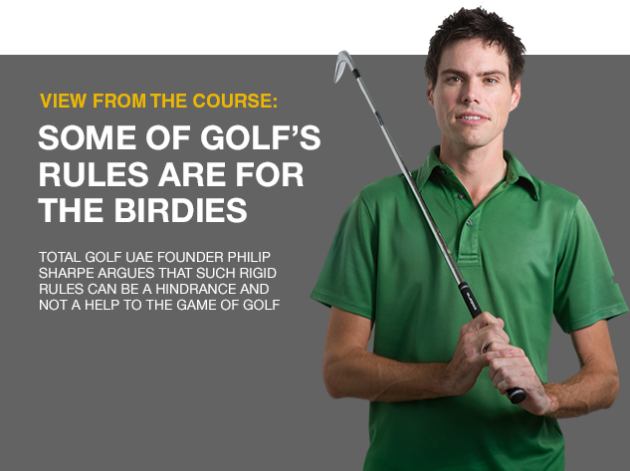 Another week, another golfer disqualified by virtue of an eagle-eyed “armchair umpire”.

Englishman Simon Dyson, playing in the BMW Masters in Shanghai, was disqualified for breaching rule 16-1a, which essentially states that you can’t touch the line of your putt. The incident, on the 8th green of the 2nd round, was not spotted at the time, but instead brought to the Tour’s attention by a television viewers. After reviewing the footage, European Tour Chief Referee John Paramor had “no option” but to disqualify Dyson as by then he had “incorrectly” signed for a 2nd round 70. The news was a bitter blow to Dyson, who would otherwise have gone into the 3rd round tied 2nd place. Currently 66th in the Race to Dubai rankings, a high finish would all but have secured his place in the DP World Championship, but instead he’ll now rely upon a good finish at the Turkish Open, the final event before the season-ending finale at Jumeirah Golf Estates.

Dyson later stated, honestly in my opinion, that he had no recollection of the event and was unaware of the infringement. The video evidence does clearly show that Dyson marked his ball and then tapped down a mark, and as a professional he should know better. It looks more like a lapse in concentration than a deliberate act. After all, on the 8th hole of the 2nd round, there is no way that Dyson would be looking to “cheat”; there’s so much golf left to play at that stage that a single shot here or there makes no difference.

Most players are happy to be called for an offence, whether it is spotted by another player, a referee or a spectator. As Jim Furyk put it, “No one wants to win when they do something wrong.” He added “In this sport, you cheat once in your life, you get labelled. It sticks forever and you’re an outcast. You’re taught a totally different set of rules here”.

In the most part, golf is a self-governing game, which relies almost entirely on the honesty and integrity of the players themselves. After all, at most PGA and European Tour events, and even at the majors, most groups are not followed by cameras, and the referee can only be in one place at one time. And indeed, the referee’s remit isn’t to spot infringements, it’s to make official decisions when a player raises a rules question. While there have certainly been occasions where players have been caught deliberately cheating, these are heavily outweighed by the times that a player has called a penalty on themselves, at times at crucial times when big money and big titles were at stake.

So the “honesty” system works, and it needs to. There is simply no other way to officiate the game. You cannot assign a referee to every player, and the cameras only watch certainly players at certain times, so even armchair fans are only watching a fraction of the action.

There are several factors which contribute to a very complicated and, at times, farcical rules system in golf. Firstly, let’s look at the incident in question, where TV cameras have contributed to a disqualification. Cameras are there not to spot rules infringements, but to bring the best action to the viewing public, and the best action comes from (a) the tournament leaders and (b) the big names. So by default, a only a handful of players are under the watchful eye of the armchair umpires. Tiger Woods, Rory McIlroy, Adam Scott – these guys rarely play a shot that isn’t televised, so they’re permanently in the spotlight. Meanwhile, on the other side of the course, “average Joe” might be breaking every rule in the book, but with no one there to see it, he can do so consequence free.

The rules of golf are long, and unnecessarily complicated. No-one can or should be expected to know each and every rule, which is why referees, themselves armed with the rule book for reference, are on hand to help players clarify uncertain situations. Some rules are definitive, clear and simple to understand, but others are a little more “cloudy”. They’re open to interpretation and it is this fact that, at times, creates the controversy. Let’s take the Simon Dyson incident as an example. Rule 16-1a states that a player may not touch the “line of putt”. So before we go any further, we need to ascertain what is meant by “line of putt”. Helpfully, the handbook includes a definition, which reads “The "line of putt" is the line that the player wishes his ball to take after a stroke on the putting green. Except with respect to Rule 16-1e, the line of putt includes a reasonable distance on either side of the intended line. The line of putt does not extend beyond the hole”. Immediately, we have a problem. Using the word “reasonable” makes this issue subjective. Some would argue that the line of a putt is very narrow…because the ball is only in contact with a few millimeters of turf, whereas others would argue that the line is a foot either side of that line. After all, what is to stop me tapping down a spike mark in front of my ball, stating that I don’t intend to play that line. Then, when I do play over that exact point, justify it by saying that I mishit the putt in that direction. OK, that would never happen, but it’s an example with the vague nature of a rule opens up the possibility of confusion and exploitation.

Most players and fans aren’t averse to the upholding of the rules, even by armchair umpires, but in the past few years the issue has become one of golf’s hottest topic because generally a retrospective rules infringement (i.e. one that was spotted after the round) leads to a disqualification. In golf, if you sign for a wrong score, however innocently, you’re out. So the current trend has been for players to complete a round, sign their card, then later have the infringement spotted and penalised. By that time, if a rule has been broken, there is little the player can do but accept their fate. The idea of having the rules committee and referee at every tournament is to ensure that, where possible, rules violations are spotted, and scores corrected, before the cards are signed. There’s no doubt that the governing bodies get just as frustrated as the rest of us when they have to disqualify a player in such a manner, but I does give them the excuse to hide behind the very tedious “rules are rules” explanation.

In an unusual show of modernity, the governing bodies did make changes to the rules in response to some very high-profile disqualifications. Now, a player will not be disqualified if it is decided that they had no knowledge that a rule had been broken. That’s not to say that players can be ignorant of the rules – if they break a rule “because they didn’t know the rule”, they’re still disqualified. But if a rule is broken beyond the knowledge of the player (i.e. he or she didn’t actually see the infringement) then a penalty still applies, but a disqualification does not. Sensible, I’m sure you’ll agree, and recognition that the game does and can evolve.

However, for governing bodies that sticks so rigidly to the ancient traditions of the game, who profess to be more interested in protecting the integrity and honour of the sport and its players, the R&A and the USGA can be incredibly blind to such factors when money is at stake. It didn’t help the R&A one iota that the first major test of the rule involved the game’s biggest attraction. Back in April this year, Tiger Woods struck a beautiful wedge shot to the 15th green at Augusta, only to see his shot ricochet off the flag and back into the pond. Woods took what at the time was considered to be a legal drop choosing to replay the shot from the same position. However, in a later interview, he admitted that he had deliberately dropped the ball 2 yards further back in order to play the same shot and land the ball 2 yards shorter. This represented a monumental blunder by Woods, who was effectively saying that he had dropped in a different position to gain an advantage. And let’s face it, this isn’t some rare, unheard of rule. It’s one of the most common and best known in golf.

Faced with the prospect of disqualifying the most famous player in golf, in a major in which he was contending, was a nightmare scenario for R&A and USGA. In a few frenzied hours that night, the press and public waited with baited breath to see what judgment would be passed. In the end, as many cynics had feared, the governing bodies used their “get out of jail card”, much to the dismay of many pundits and experts. In the end, it was determined that as the drop was at first deemed to be legal (and only deemed illegal after Woods’ own comments), disqualification for an incorrect card did not apply. However, this decision didn’t address the fact that the player himself did know that that the drop was illegal. The governing body and referees might have seen nothing wrong, but that’s not to say that there wasn’t an infringement committed.

The rules of golf, like any sport, exist to keep the sport fair for all competitors. But golf is unique in that it is almost entirely refereed by the very players taking part in the game, and now apparently by armchair umpires, sitting at home with their HD TV remote in one hand, and their telephone in the other. The sport’s governing bodies have created a near-impossible position for themselves by allowing “3rd parties” to become actively involved in the management of the game. I don’t think I’m alone in thinking that the some of the ancient rules need updating, and that the rule book could do with being rewritten with “common sense” as the guiding principle. But also, let the players and tournament referees administer the rules, and no-one else. Once the cards are signed, if the players and the group official are happy, then so be it. If it later turns out that one of the players had thrown his ball out of a bunker and putted the 7th green with his foot, then so be it. The cards are signed, the day is done.

Simon Dyson is an easy target. One that the R&A can punish to show that “the rules are sacred” without really upsetting too many fans. He’ll take it on the chin like a professional, as have other players disqualified for similar reasons. However, they, like us, will wonder why it’s “one rule for them, one rule for us”, and the R&A will be dreading another high-profile incident such as this, especially one involving a big name.

The solution therefor is simple. Like all other sports on the world, let the referees make the decisions. Players will continue to raise questions and referees will continue to spot violations. And once the cards are signed, let that be it.

Golf has for decades been the envy of the sporting world for the integrity and honesty of the players. Isn’t it ironic, therefore, that these incidents, which serve only to sully the reputation of the game, are created purely by the governing bodies tasked with upholding such a reputation?