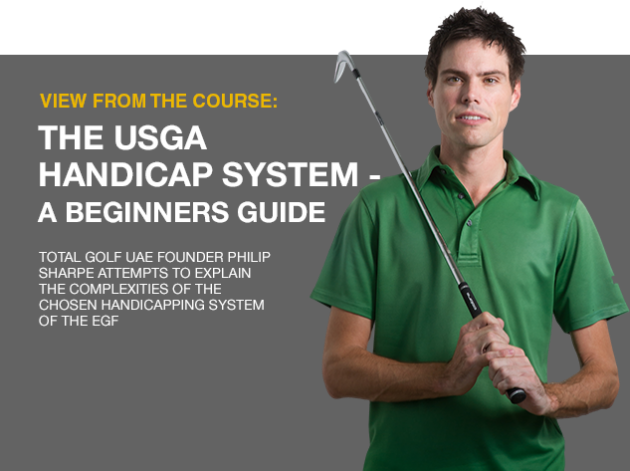 Love it or loath it, the Emirates Golf Federation (EGF) uses the The USGA Handicap System™. Or perhaps you neither love it nor loath it, because (a) you have no idea what it is or (b) you have no idea how it works. I suspect that many of you fall into the second category. But that’s OK, I’m here to help you out.

Firstly, let’s get right back to basics. Put very simply, a handicap is defined as “a numerical measure of a golfer's potential playing ability”. In layman’s terms, it’s a measure of how good someone is at golf. Handicaps are measured, generally, from 0 (also called “scratch”) to 28 for men, and 0 to 36 for ladies. Professional players (and many elite amateurs) are “scratch golfers” – for the sake of this article their handicap is 0 (zero). The rest of us will have handicaps ranging from 0.1 to 36, and are categorised accordingly. The handicap categories are;

Based on various criteria (which will be discussed below), every golfer registered with the official governing body (in this case, the Emirates Golf Federation, or EGF) is provided with an official handicap, and is eligible to have that handicap managed and updated as new scores are added to the system. An official handicap is required to enter most tournaments.

Most importantly, it is the handicapping system that (almost uniquely in all sports) enables players of different abilities to compete with and against each other on an equal basis. So if, for example, Lee Westwood fancied challenging me to 18 holes of match-play (I wish), then despite him being one of the best players in the world and me one of the worst, the handicapping system would enable us to take to the course and enjoy a competitive game against each other. Well, I say “competitive”, but I doubt it’d be that. I’d probably still have to limit him to 3 clubs. And one hand.

Contrary to popular opinion, a player's handicap is intended to show a player's potential, not a player's average score. The frequency by which a player will play to their handicap is a function of that golfer's handicap, as low handicappers are statistically more consistent than higher handicappers. According to the USGA Guidelines, a player should play to, or better, their handicap “only once out of four to five rounds”, and that in order to do so, that player has to have played very well indeed by their own standards. In fact, according to research carried out by the USGA, a player should average three strokes higher than his Course Handicap.

So if you’re routinely scoring over 36 stableford points, or scoring under par on a net basis, then your handicap is likely incorrect. You should struggle to hit your handicap, and only do so on a rare occasion. It is through practice and perseverance that you should manage to beat and subsequently your handicap.

So let’s go back to the imaginary game between Lee Westwood and i. How is it then that we can compete on the same course, in the same competition, despite the massive gulf in ability? Here’s how. I get additional shots over Lee in that game. How many depends on various criteria, which I attempt to explain below.
Lee Westwood is a scratch golfer. That basically means that, on an average day, he is able to shoot a level par round on any course. Statistically (though the professionals far exceed these numbers), a scratch golfer drives the ball on average 250 yards and can reach a 470 yard par 5 in two strokes. Under the USGA Handicapping system, my own “handicap index” is 7.1.

Now, let’s understand what “handicap index means”. A “Handicap Index” compares a player's scoring ability to the scoring ability of a scratch golfer on a course of standard difficulty. So this is how many shots better a scratch player is than me, on a standard difficulty course. A Handicap Index is computed from a player’s 20 most recent scores (plus any eligible tournament scores). It reflects the player's potential because it is based only upon the best 10 scores from the last 20 rounds. So this systems allows a players to have an “off day” – a round playing 20 shots over handicap will not reflect in the calculation and will not affect a players handicap.

“Standard difficulty”, I hear you ask? OK. All courses that fall under the jurisdiction of the USGA Handicapping system are evaluated for difficulty, and each is assigned a “USGA Course Rating”. Now, it important to say that this USGA Course Rating evaluates how difficult that course is for a scratch handicapper. Why is that relevant? Because the relatively difficulty of a course depends largely who’s playing it. Better players are affected by difficulty less than weaker players. Better players are more consistent, and better equipped to deal with tough courses. So if a 5 handicapper and a 25 handicapper played a very tough course, the 5 handicapper might, for example, play 5 strokes over his handicap, but the 25 handicapper would likely shoot 10 over his.

Courses are rigorously rated against a series of standardised criteria. A team of experts will physically visit and walk every inch of the course, assessing factors such as:

Once all the numbers have been crunched, the course is assigned a rating (reassessed at least every 10 years), which is expressed as a decimal number representing the number of strokes a scratch player should record on that course on an average day. Every set of tees is analysed, and a different course rating assigned for each. This is because different tees boxes mean the course plays a different length, that landing areas are different etc. As an example, Bethpage Black golf course, a notoriously hard course in New York, has a course rating of 78.1 from the blue tees, or 6.1 shots over par for a scratch player. To back-up my earlier point about the relative performance differences between scratch and other players, Bethpage Black, for a “bogey golfer” (one who has a handicap of approximately 18), has a rating of 106.2…which is some 16.2 shots over that bogey golfer’s handicap.

So where are we? Oh yes, Lee Westwood and I are playing an imaginary game. We’re looking at how courses are rated for difficulty, which will help us decide how many additional shots I get over Lee in our game. Are you keeping up with me? Good, then let’s continue.

Let’s say Lee and I are going to play the Majlis Course at Emirates Golf Club. We’ll play from the back tees. This course has a USGA Course Rating of 75.3, meaning that as a scratch player, Lee should hit that score. What we now need to ascertain is what I ought to hit. Yes, we know that my handicap index is 7.1, but that index represents the difference between Lee and I on a standard difficulty course. But is the Majlis more or less than “standard” difficulty? To find out, we need to look at the “USGA Slope Rating”. The Slope Rating assesses the relative difficulty of each course for a bogey golfer (approximately 18 handicap) versus a scratch player. As I said before, difficult courses are more difficult for weaker players. Slope Rating is a measure of how much more difficult. Though it’s not really relevant here, Slope ratings are calculated using the formula: (Bogey Rating - USGA Course Rating) x 5.381 (men) or 4.24 (women)

The result will be a number between 55 and 155, and an average difficultly course has a rating of 113. This number does not equate to strokes; it is purely an index number that will now be used in a calculation to work out my “Course Handicap” – how many handicap shots I am going to get in my game against Lee, based on the course and tees we are playing. Because though my “Handicap Index” is 7.1, my “Course Handicap” is different for every set of tees on every single course.

The Majlis has a slope rating of 143, meaning that it is harder than standard difficulty. OK, so now that we know the:

USGA Course Rating (75.3) – how many strokes a scratch player should make on this course

Slope Rating 143 – an index of how hard the course is for a bogey golfer, where 113 is “standard difficulty”

that Lee is a scratch player - 0 handicap

So in my game against Lee Westwood, playing the back tees of the Majlis course, I will be given a handicap of 9 strokes. This is 1.9 additional strokes on top my Handicap Index, which reflects that the Majlis is course of more than average difficulty. So what have we learned here? Let’s summarise in laymans terms:

- Separately, courses are rated against each other in terms of how difficult they are for bogey golfers to play compared to scratch players. Don’t forget, relative difficulty increases as ability decreases

- Handicapped players are allocated strokes (Course Handicap) based on the relative difficulty of the course. The harder the course, the more strokes you will be given.

There are no perfect systems for managing playing handicaps. The USGA Handicap System, like all others, has both pros and cons, but those are for another blog altogether. The EGF uses this system – one of which I am personally a fan – and your eligibility to play many tournaments is dependent on your having a registered handicap.

But forget the tournaments. Having a managed, official handicap is the only way for a player to really understand whether or not they are improving. It is impossible to “track your own progress” because, as discussed above, all courses are different. Hitting 80 at Yas represents a different standard of play than hitting 80 at, for example, Sharjah Golf and Shooting Club. Working hard, playing well and seeing a gradual drop in handicap is one of the most rewarding aspects of playing golf, and I would encourage anyone playing once a month to get registered.

Details of the system and registration process can be found at http://www.golferscard.ae/.