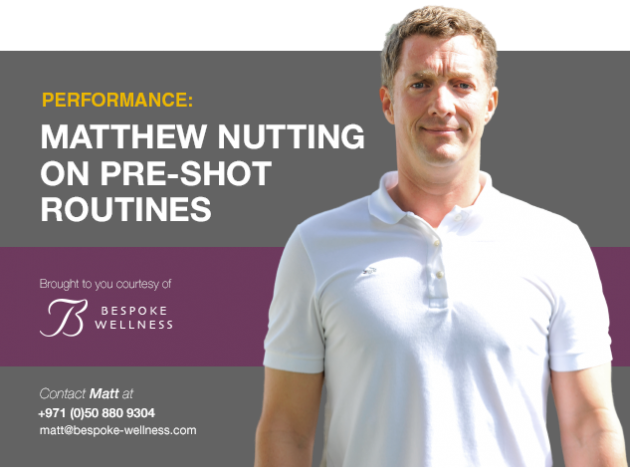 Camilo Villegas spends almost seven hours on the golf course on a tournament day. The average round of golf on the PGA Tour is around four and a half hours, with the remaining time spent on the practice ground and the putting green. Only 10% of Camilo's time on the golf course will be spent actually playing golf. While amateur golfers typical spend less time on the practice ground and on the course, it is still impossible to keep focused for over 4 hours.

The pre-shot routine enables players to enter their "peak performance state" at the right time during the round. The peak performance state, which is different for each player, is to be focused, sharp, committed and energized. All players experience loses in concentration at pivotal moments. This is often due to burning up too much mental energy at the wrong time. Developing a pre-shot routine that has both a specific starting point and a specific finish trains the brain to understand when it needs to concentrate (to enter the peak performance state)and when it can take a break.

Developing the physical and mental process for a pre-shot routine is not easy. A lot of amateur players are simply wasting time by trying to copy what they have seen the tour professionals do on, without any purpose or understanding of what it is supposed to achieve. This often results in negative thinking and increased tension in the body.

A good framework to develop a pre-shot routine is to break it down into a series of boxes: the decision box, the visualization box, the alignment box, the trigger box, and the detachment box.

The decision box, as the name suggests, is where you select the club required bearing in mind wind, hazards, shape of the shot, current level of confidence and strategy for the hole. This decision should also require a player playing to his strengths. You can spend as much time as required in the decision box, but when you leave you must be totally committed to the target and the shot. A good starting point, and one widely used, is opening the Velcro on your glove. This has very distinctive sound and sensation and while putting it on you can start to formulate your decision. This process is important as without a clear decision you can’t visualize the shot you are looking to hit.

'We worked on a way to visualize the target and pull it back into my hands and body and let my subconscious react. That's what's best for me.' 'It is inherent in what I do now.' Tiger Woods

The visualization box is one that typically requires the most time to improve, as we not typically taught how to develop our visualization skills. Retief Goosen advocates selecting a target which is as precise as possible; for example a specific branch of a tree. Another great tool to help develop your visualization skills is to ask yourself the question, “What does the perfect shot look like here?” When we ask ourselves a question, the brain has to answer, and this a great tool that can be should be incorporated into a pre-shot routine to increase effectiveness. The visualization process is absolutely fundamental. Research shows that the body will follow what the mind visualizes. It also shows that if the think you are going to hit a bad shot, 90% of the time you will.

Once you have felt and visualized the shot, take a practice swing. This needs to be considered as a dress rehearsal. The golf swing engages a substantial number of muscles so it is important to build up a muscle memory of what you are looking to repeat. This will in turn improve the effectiveness of the pre-shot routine. On the putting green, or while chipping, look at the target while doing your practice swing and generate a conscious rehearsal of the type of swing for the shot. This is the last time a player should think of any swing mechanics.

The trigger box is the point of no return. It is proven that your breathing reflects your emotions. While there are an array of breathing techniques that are effective in releasing tension, the "reflex breath" is great technique to include in a pre-shot routine. This technique help to remove any lingering negative emotions. Simply breath in for five to ten seconds, actively pulling your belly button towards your spine. As you exhale, your breathing will automatically regulate itself, thus releasing and residual tension. Complete the trigger box by aligning the clubface to the target, take a couple of small waggles to make sure the body is relaxed; the last of these waggles will be the trigger to initiate the swing.

Another technique that might improve the effectiveness of the pre-shot routine is to actively think of something unrelated as you initiate to the swing. This stops distracting technical thoughts creeping in. For example, think of a particular colour or your belt buckle. If you are an analytical player and you haven’t tried this before you may find that this simple tool will improve your performance dramatically.

As already mentioned, is very important to allow the brain to relax now the swing has been completed. The detachment box may simply involve consciously taking the glove off and placing it in your back pocket, which is a technique used by Martin Kaymer.

When Nick Faldo came from behind to beat Greg Norman in the 1996 Masters, his pre-shot routine for every shot on the round was within a two hundredth of a second. Greg Norman’s on the other hand fluctuated dramatically. Developing a pre-shot routine based on these techniques and tools will help you to create your optimal performance state. When you are calm, confident and have a clear image of what the perfect shot will look like, and the probability of you hitting that shot increases dramatically.